Story behind this Biryani Masala Recipe

Growing up, I had never seen my Ammi(mother) use boxed Biryani Masala or Garam Masala in India. She would grind her own spices every month without fail. I was amazed by the fragrance that came from those spices as she roasted them using her old Kadai (wok). She grinded them in her ancient spice grinder. She has been using the same grinder for 30 years, folks. I have yet to find a spice grinder that won't break lol.

I truly can't brag enough about my Mother's Masalas Masha'Allah. Her Biryani Masala and Garam Masala are loved by many and meaty meals made from those masalas get finger-licked by family and friends.

This Biryani Masala recipe is close to my heart. It brings back many wonderful memories; memories of eating Biryani and meat curry prepared by my Mother using this spice blend. I would take the first bite of her curries and biryani and I knew she used her homemade spice blend.

What is Biryani Masala?

Biryani is a very famous Rice and Meat dish in South Asia and Masala is a blend of many different whole spices. The spice blend used in Meat Curry for Biryani is a base source to create the magical taste of Biryani. Understanding which spice goes in what quantity for Biryani Spices is a gifted skill.

Learning about the tastes of spices, experimenting, and understanding exactly which spice to include, which one to exclude and which one overpowers the other spice is the key to creating the best blend of Biryani Masala.

You will find many different varieties of Biryani in South Asia. That's how versatile Biryani is. The main ingredients of Biryani Masala (spices) are the same.

Some parts of South Asia include Amchur Powder (dried mango powder) in their Biryani Masala blend for the tang, and others prefer to add Aloo Bukhare (dried prunes). Either way, South Asians love their Biryani. They are very proud of their Biryani heritage and refuse to hear anything negative about it.

What is in This Recipe:

This is my family recipe. I have used 13 main whole spices to create this beautifully fragrant Biryani Masala blend. It can be used as Garam Masala for Curries.

Adjust chili powder, turmeric, cumin-coriander, and salt according to your spice tolerance for biryani masala.

This recipe requires dry roasting the ingredients. Dry roasting the spices drives off the excess moisture and toasted spices are easier to grind into a fine powder consistency. Dry roasting lengthens the shelf-life of powdered spices. Biryani Masala stays great for up to 6 months in an airtight container or a Jar.

Exact measurements for Bombay Biryani Masala are included in the recipe card notes.

How to Use Biryani Masala:

Biryani recipes to use this most fragrant Biryani Masala. You can also use this blend as a garam masala for meat curries.

Tip: use 1 teaspoon to 1 tablespoon in a large pot of Meat Curry depending on your tolerance of spices. Go for less quantity if you are trying Biryani Masala for the first time. Increase the amount as needed. 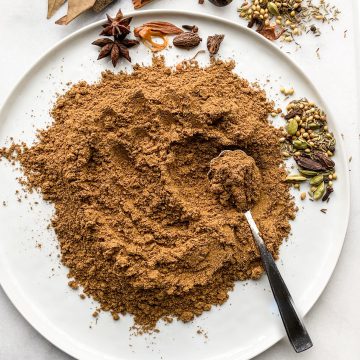 Ingredient measurements are for approximately 2 pounds Meat and 1 ½ cups Rice for Mild Spicy Biryani. Increase the quantity according to your heat tolerance level. For Mild Bombay Biryani Masala

Hi, I'm Safiya! I'm an author, food photographer, recipe developer, and the creator behind Feast with Safiya. So glad you stopped by..more about me