Fish tagine is such a great way to stew fish, vegetables, and olives with herbs and spices. Moroccan Chermoula sauce with floral saffron, and aromatic Ras el hanout or Harissa spice blend takes the simple white fish dish to the next level.

I can't forget the phenomenal flavors of chermoula in the tagine. Out of all the wonderful tagine we had in Morocco, fish tagine was one of my favorites. Moroccans use preserved lemons in many of their dishes and tagine is one of them. Chermoula tastes great with preserved lemon.

I am not using preserved lemons. I have always had a difficult time finding it in Salt Lake City and life gets too busy to preserve lemons at home ;). Preserved lemons are preserved in water, and sea salt. I am using lemon zest, sea salt, and some fresh lemon juice to mimic the preserved lemon flavors.

How to Make Tagine

How To Serve Fish Tagine

Moroccans serve tagine with semolina or white bread along with small side dishes like a cucumber tomato salad, olives, pickled veggies.

Couscous or plain rice are great options to serve tagine. Though, they aren't traditional ;).

Can I Add Apricot or Prune to Tagine?

Of course. You can add apricots, prunes, dates, or raisins to the Tagine. You can also use a tablespoon or two of honey to make the tagine sweeter. That's how we eat it in America ;).

Tagine is such a great way to stew meat and vegetables for Iftar during Ramadan. It's one of our favorite one-pot meals. Everyone in my family enjoys having it after a long day of fasting. Quick and easy, doesn't take too long to prep either. 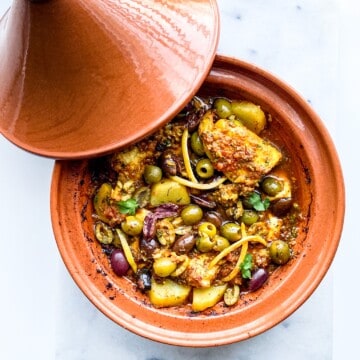 Hi, I'm Safiya! I'm an author, food photographer, recipe developer, and the creator behind Feast with Safiya. So glad you stopped by..more about me