Biryani is a magical combination of some generously spiced Meat or Vegetable and Rice. Biryani is cooked until the aroma of the delicious curry meets the fragrance of Basmati Rice. Get creative and play with Biryani spices and your favorite protein. I have used Indian Paneer (Indian Cottage Cheese) for this recipe.

Story Behind This Paneer Biryani

Any good occasion called for Ammi's Biryani in our home. I grew up seeing Ammi, khalas(mother's sisters), Mami(wife of mother's brother) and other women of my family always experimenting with different ingredients for Biryani recipe.

My Biryani recipe is inspired by women of my family. They never fail to amaze me in the kitchen. Following their foot steps, I decided to experiment Biryani with Paneer and it became family favorite. Fried Paneer slathered in tomato based curry, then layered with Basmati rice.

What's in My Paneer Biryani Recipe

This recipe is slightly different than a traditional Biryani Recipe. Instead of using Biryani-Masala I have used Butter Chicken Masala blend for this recipe. Great balance of my favorite carb and dairy based protein makes the flavor packed Biryani.

Paneer- Paneer is an Indian Cheese made by curdling the milk. It is firm yet creamy in texture and mildly sour in taste. It is easily available at any local Indian Grocery stores in America.

Yogurt- I only recommend using creamy Indian yogurt for your Biryani recipe. It has perfect creamy consistency with the right amount of water for your Meat Curry. No Greek Yogurt substitute for Biryani. Sorry!

What to Serve Paneer Biryani with: 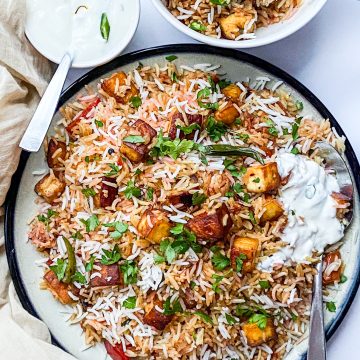 Drizzle an extra tablespoon of Ghee on top of the rice layer for an authentic taste. Sounds a bit greasy but tastes phenomenal! 😉

Calories: 720kcal
Did I inspire you to cook?Mention @feastwithsafiya on Instagram so I can share your creation!
1
Share
« Stuffed Eggplant(Bharela Ringan Nu Shaak)
Baked Fish Masala-Whole Fish Masala Recipe »

Hi, I'm Safiya! I'm an author, food photographer, recipe developer and the creator behind Feast with Safiya. So glad you stopped by to learn about me and I hope you get to try some of my recipes. Here you'll find Modern & Authentic Indian recipes that I usually cook for my family.